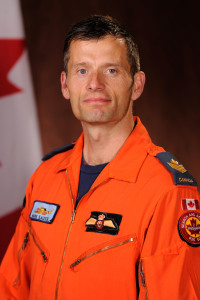 Mark “Sal” Salesse joined Comox Valley GSAR in the spring of 2005 after completion of his SAR tech training and subsequent posting to 442 SQN. He was a humble man, always quick with a smile and never very far away from a food source. Even though he brought a considerable skill set to our team, Mark thought of everyone as an equal. A giant in both stature and spirit he adopted the men and women of CVGSAR as his extended family. He took the time to get to know each one of us, devoting time with a great sense of humor, to draw out the very best in everyone around him.

Inevitably, Mark was posted to 444 Combat Support Squadron in Goose Bay Labrador in 2009 and finally 435 Squadron Transport and Rescue Squadron in Winnipeg, Manitoba. Not one to let distance get in the way, he always stayed in touch and would show up unannounced at weekly training nights whenever he was back in the Valley. During these times, Mark helped to forge a stronger relationship between 442 Sqn and CVGSAR, involving us in many unique and ambitious training events.

Mark died doing what he loved most, living the life of a SAR tech, and training in the Rockies. An avalanche swept him away during a Canadian Forces Training mission near Banff in February of 2015, leaving behind him a legacy of compassion, humbleness and excellence for others to aspire.

Comox Valley GSAR will forever mourn the loss of not only an excellent teammate, but a dear friend as well.