In 2013 and 2014, Emergency Management BC submitted proposals to the National SAR Secretariat New Initiatives Fund for a project to update the rope rescue program for British Columbia SAR groups, which was developed in the 1980s and 1990s and has not been significantly updated since 2002.  The 2014 proposal received approval and funding support over the summer of 2015 and was launched by EMBC under a Project Management Team (PMT) comprised of Ross Cloutier, Tom Volkers and Phil Whitfield.  With NIF grant funding of approximately $455,000 supplemented by in-kind contributions of $145,000, the project was to be completed by the end of March 2017.

During the project it was recognized that additional time and supports were required to complete a thorough review and refinement of the training materials. The NSS provided additional support and the project to be extended until Mar 31, 2018. 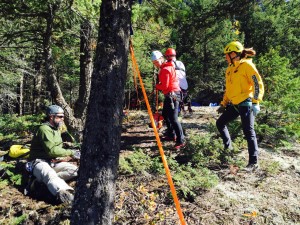