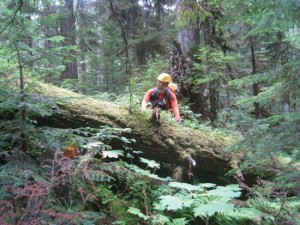 SAR members are known for wanting to help others, but some people just go the extra mile and Rollie was one of those. He did the basic stuff that we all do, and then he went further. Since his day job was as a paramedic he immediately became a driving force in the team’s medical preparedness. He taught many first responder courses, and added in AED training, O2 therapy, and taught us how to assist him if he needed to deliver IV Fluids or other medical procedures. I spent many hours being taught by him over the years. Many newer members of the team know Rollie as one of their Ground SAR trainers, and fondly remember his mentorship.