This weekend saw the unveiling of the official BCSARA Challenge Coin in a step towards recognizing the efforts of our membership in shaping our organization from its initial days as the BC Search and Rescue Advisory Committee and now into the British Columbia Search and Rescue Association.  The coins are sequentially numbered and will be issued to members on our soon to be completed Roll of Emeritus.

The historical relevance to a challenge coin can be found within the Military where a unit would present a coin with their insignia to those who performed a special service to the unit.  Coins have taken many forms since, while still holding their ceremonial value, they have also become somewhat of a collector item in the name of camaraderie amongst first responders and paramilitary organizations.

The BCSARA Challenge Coin depicts the official crest of the Association on the face where the coin number will be visible.  The reverse side of the coin depicts our ties nationally with the Canadian Flag, provincially with the British Columbia Flag and three symbols.  The symbols are the compass needle, ensuring we never lose our direction and to represent searching, the carabiner holds us together with strength and function while representing rescue and finally, the circle of rope with a figure eight represents the loop that ties all of these components together to make our Association stronger.

BCSARA awarded two coins this weekend during the RADeMS Conference in Richmond.  Coins number 1 and 2 were presented to two men who have shaped SAR within BC for many years.

Dave was the force behind the formation of the BC Search and Rescue Advisory, a leading edge move that brought together SAR volunteers, Government (via Emergency Management BC), requesting agencies (RCMP and Municipal Police) and training from the Justice Institute of BC.

The role of the SAR Advisory Committee was absorbed by the formation of the British Columbia Search and Rescue Association, of which Dave  became the founding President.  Dave has been at the forefront of SAR advocacy for over 40 years and it was our honour to present him with coin #1.

Don served on the SAR Advisory Committee as the RCMP Liaison for many years and upon his retirement from the RCMP was the founding Treasurer of the British Columbia Search and Rescue Association prior to becoming President.

Don has been a strong advocate for our Association and lead us through several challenging events, including the line of duty death of Sheila Sweatman as Don has played a significant role in our Swiftwater Rescue Task Force. 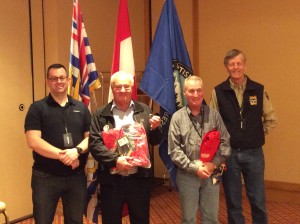 In addition to their Challenge Coins, both were also presented with a BCSARA Arc’ Teryx jacket.